Thank you to everyone involved!
Check out the final scores, see the podium pictures and follow Blackjack Images and Jess Wight Photography  for pictures from the show!

Come and go as you please. Novices are competing in the morning, everyone else starting at noon.

On street parking is free, lot parking is usually $5 or $10 on weekends.
Lots are accessible from Salisbury St and Wilmington St. Fayetteville Street will be closed for our competition.

James Deffinbaugh and Spider Strength Gym
Contact us at SpiderStrengthGym@gmail.com

The competition hotel is the Raleigh Marriott City Center. It’s a top rated hotel directly in front of our competition area. Our price is $179 per night, down from $229 on the site (Thursday through Sunday). Friday weigh ins will be at the hotel, so you won’t have to go anywhere to weigh in and check in.

It’s right in front of the competition. If you get a room there, you can poop in your own room rather than using the portapotties.
Some of the rooms don’t have bathtubs. If you’re cutting weight, I’d recommend a Sauna Bag. It was a game changer for me, bathtubs were inconsistent and uncomfortable, but the bag works great every time. Just bring lots of sweatpants, sweat shirts, and thick socks to absorb the sweat.
To book, click the link below, or call them and ask for the group rate “SPIDER STRENGTH STRONGMAN COMPETITION”.
https://www.marriott.com/event-reservations/reservation-link.mi?id=1643157920388&key=GRP&app=resvlink

$90. Entry fee is refundable – just let us know (by emailing spiderstrengthgym@gmail.com) if you can’t make it by February 1st and we’ll refund the entry fee.
Strongman Corp membership also required. $77 annually. Sign up or renew here.

EARLY BIRD SPECIAL!
First 3 competitors in each division are $20 off.

Deadline to enter and be guaranteed a shirt is February 15th.
Entry fee refundable if you drop out by February 1st.

No athlete caps! The more competitors we get, the more lanes we’ll have!

Competitor will carry three farmer’s implements of ascending weight 40′ each.

The front of the implement must cross the line on each run.
Unlimited drops allowed.

Equipment will be custom top-loaded farmer’s implements with a 16″ pick height (measured to bottom of the handle) and 1.25″ diameter handles.

60 second time limit. Your score will be total distance completed or time to finish the course. No split times.

Equipment not allowed:
Gloves, straps, and anything sticky.

Weight Chart:
All weights are listed in pounds, per hand. 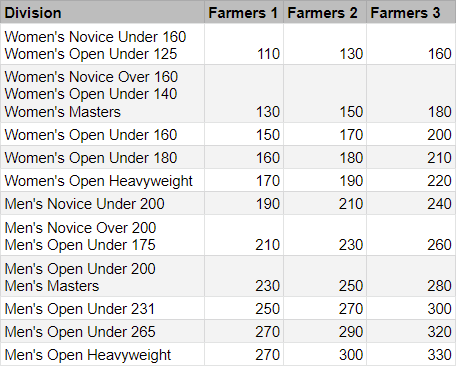 Competitor will deadlift three axles of ascending weight.
Competitor starts behind a line. On go, the competitors deadlifts the first axle.
After the “good” command, the competitor moves on to the second axle.
The last axle will be deadlifted for reps. There are also up commands after the first rep on the final axle. No touch and go reps, no bouncing. No sumo.

Pick height is 13″ to the center of the bar.

60 second time limit. No split times. Your score will be total reps completed.

Equipment not allowed:
Deadlift suits or anything sticky. 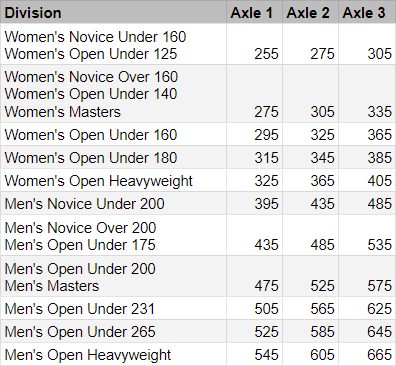 There will be two sandbags lined up at the starting line, a lighter bag and a heavier bag. Competitors will pick up the lighter bag, carry it around a cone 40′ away, and bring it back across the starting line. Competitor then picks up the second sandbag, carries it around the cone and comes back. Time stops when the front of the sandbag crosses the line.

Competitor will get a time if they complete the course, or a distance if they don’t. No split times. 60 second time limit.

Equipment not allowed:
Anything sticky 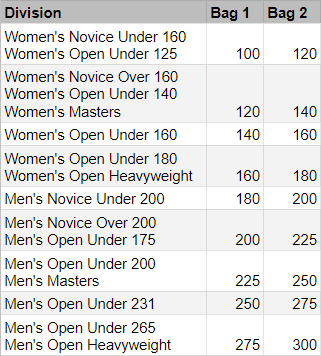 Competitor starts behind a line. On go, the competitor steps up to the implement and presses away for as many reps as possible. Competitor may try the heavier weight first, but if they fail it will cut into their time for the lighter weight.

Competitors will face towards the implement to press.

Jerks, push presses, thrusters, and strict press are all allowed. There are no rules against double knee bend. No penalty for setting the viking press down.

Handles will be neutral grip, 24 inches apart (on center). The pick height will be set per weight class. Expect a lower pick to accommodate all athletes.

Weight Chart:
All weights are listed in pounds, weight-in-hand. That means if it’s listed as 100lbs, it should be the equivalent to pressing a 100lb bar, thanks to the leverage of the apparatus. The “Mercy” column is the lighter option if you can not get the heavier weight. The Mercy weight is really tentative depending on how the apparatuses work out. 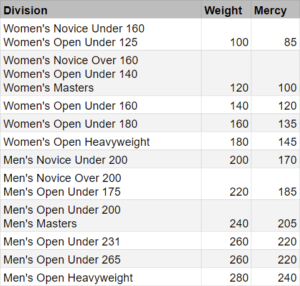 This is a last person standing, max sandbag over bar done in battle format.

After everyone has been through the first bag, a volunteer will put out the next heavier bag, and the process repeats until no more than one competitor is left.

All competitors must attempt every bag – no skipping bags.
When you fail, you’re out and your score is the heaviest bag you successfully loaded.

So, as more competitors drop off, time between loads will shorten, bringing in a conditioning element as well.

Equipment Not Allowed: Anything sticky

All sandbags weighing 150lbs and under will be the “150lb size”, filled with sand and crumb rubber. That means the smallest ones will be almost as tall as they are wide, so more like atlas stone shaped.

All sandbags weighing 300lbs and up will be the 300lb size, filled with sand and steel. That means they won’t be the super tall ones that get really awkward. The hope is that it will mean we’ll see some huge numbers! 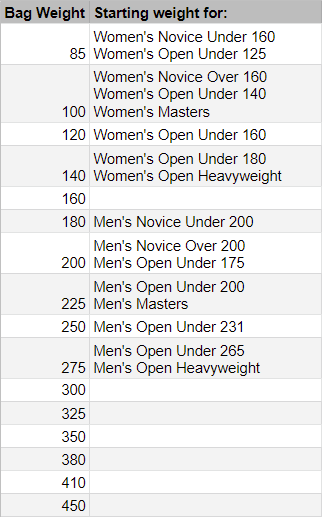